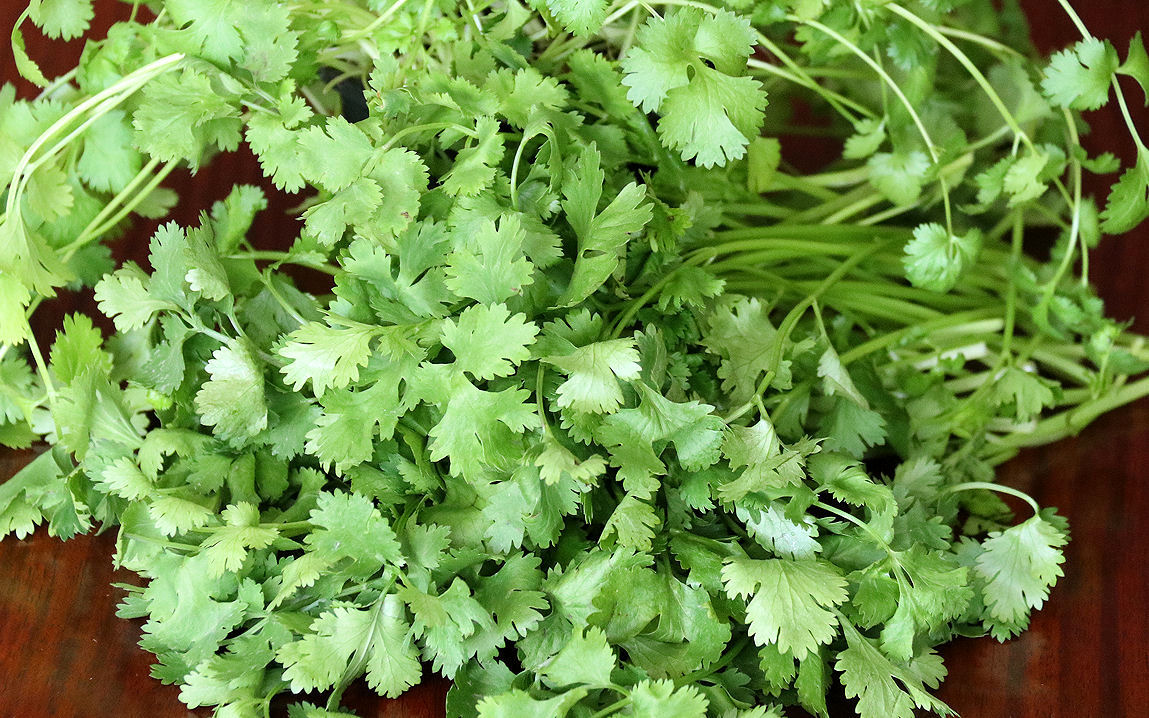 Some of its names are Cilantro, Chinese Parsley, Dhania, Kottmir, and Kozbara. Easy to grow in moderately sunny conditions, all parts of this annual umbelliferous plant are valuable and are edible. Fresh coriander leaves grow on sturdy stems, similar in appearance to flat-leaf parsley, as shown in the photo at the top of the page, Coriandrum Sativum. Although  delicate and easily crushed, these leaves are assertive in flavor especially when consumed raw. They possess high levels of vitamins A, C, and K and many minerals including calcium, magnesium, phosphorus, potassium, and sodium.

Coriander fruit, often called coriander seeds, grows on separate stems wtih feathery frond-like leaves, similar in appearance to dill or wild fennel. At the top are tiny white to pale pink flowers which produce crowns of shiny green balls of fruit if left to develop into maturity. These can be used fresh or dried, either whole or ground into a powder. The fruit contains lower levels of the same vitamins as its leaves but has significant amounts of calcium, selenium, iron, magnesium, and manganese. There is a remarkable taste and aroma difference when comparing coriander's fresh leaves with their citrus, soapy character versus its fruit with its sweet, highly aromatic nature.

Traditions: The coriander plant does not grow naturally in Egypt’s climate, so historians assume it was cultivated. In ancient Egyptian cuisine, it was believed that coriander steeped in wine had the power to bring happiness, what a lovely thought! Coriander was prescribed also for promoting a good night’s sleep. Dried mericarps, split dry coriander fruits called Kozbara Nashfa, were found in pharaohs' tombs, underscoring the use of coriander oil in religious ceremonies. It is one of the bitter herbs designated in the Bible to be eaten at Passover. In India, it was used for magical incantations and offerings to the gods.

Dried coriander fruit was one of the components of the popular Garum, also known as Muria or Liquamen. Garum was a mix of small fatty fishes, several spices, herbs, and salt, layered and preserved together in amphore. Over many months, this mixture slowly liquified into a type of sauce; it was used much as fish sauce or soy sauce is used in cuisine today. According to Apicius, coriandratum sauce with its predominating coriander flavor was mixed with garum and vinegar, sometimes a touch of honey was added for sweetness. Ancient Roman recipes using dry coriander fruit for flavoring whole fish and roasted lamb or kid were favorites of the time, as well as retarding meat, poultry, and fish spoilage.

From Book III, On Right Pleasure and Good Health, Platina (1421-1481 A.D.) #22. On Coriander. "Egyptian coriander is considered outstanding; it isnot found among the wild herbs. Ground and given to drink, it has great force to cool burning sensations. It should not be eaten alone on account of its innate harmfulness, but either with honey or raisins, or in our manner, which is more pleasant and healthful: prepared in vinegar and rolled in sugar…"

Applications: Coriander leaves and stems are consumed as a stimulant, a diuretic, a blood cleanser, and tonic. Ingestion of fresh leaves have been tested successfully for reversing memory loss, leading to its potential for managing conditions such as Alzheimer's disease. Chopped into a pulp, it can be applied to eyelids to relieve conjunctivitis. Pressed, the juice counters skin rashes and diseases. Extracts from the leaves and stems are used to lower blood sugar levels as well as lower total cholesterol. Coriander fruit is dried then ground into powder and used in cosmetics as well as cuisine. As a tincture or tisane, the fruit is a sedative and eases anxiety, and is carminative, excellent for stomach maladies.

Chinese Medicine: The coriander plant is considered warm and pungent. Consumption creates a calming influence, promotes digestion, and relieves gastric acid and stomach pains due to cold. Used in soup with carrot and water chestnut, it actually speeds the outbreak of measles rash once contracted, especially on days 2 and 3 if there are signs of eruptions. Cooking with fresh leaves and roots removes offensive odors, especially from fish and meat. It is used to increase warm energy and internal heat when consumed.

Coriander Essential Oil: This oil is an analgesic, and contains anti-fungal, anti-microbial, and anti-bacterial powers. It is known for treating Candida species which cause yeast infections, and its antiseptic properties treat oral infections. It effectively kills foodborne pathogenic bacteria. Fortifying the stomach, coriander is carminative and promotes good digestion especially with foods difficult to digest. It stimulates the appetite and the production of gastric juices, and eases nausea and bloating. It regulates breathing, stimulates the heart, promotes blood circulation, and helps the body elimate blood toxins. It helps with insulin absorption, relieves headaches, alleviates muscle and joint pain, and eases anxiety. External use of essential oil made from its seeds is recommended for alleviating facial neuralgia, toothaches, rheumatic conditions, and the pain from shingles.

As a Medicinal Plant: Coriander is a source of powerful antioxidants. Extracts from its root have shown to inhibit DNA damage, prevent cancer cell migration, and promote cancer cell death in laboratory studies. Research continues so please monitor results on the internet and with your physicians. 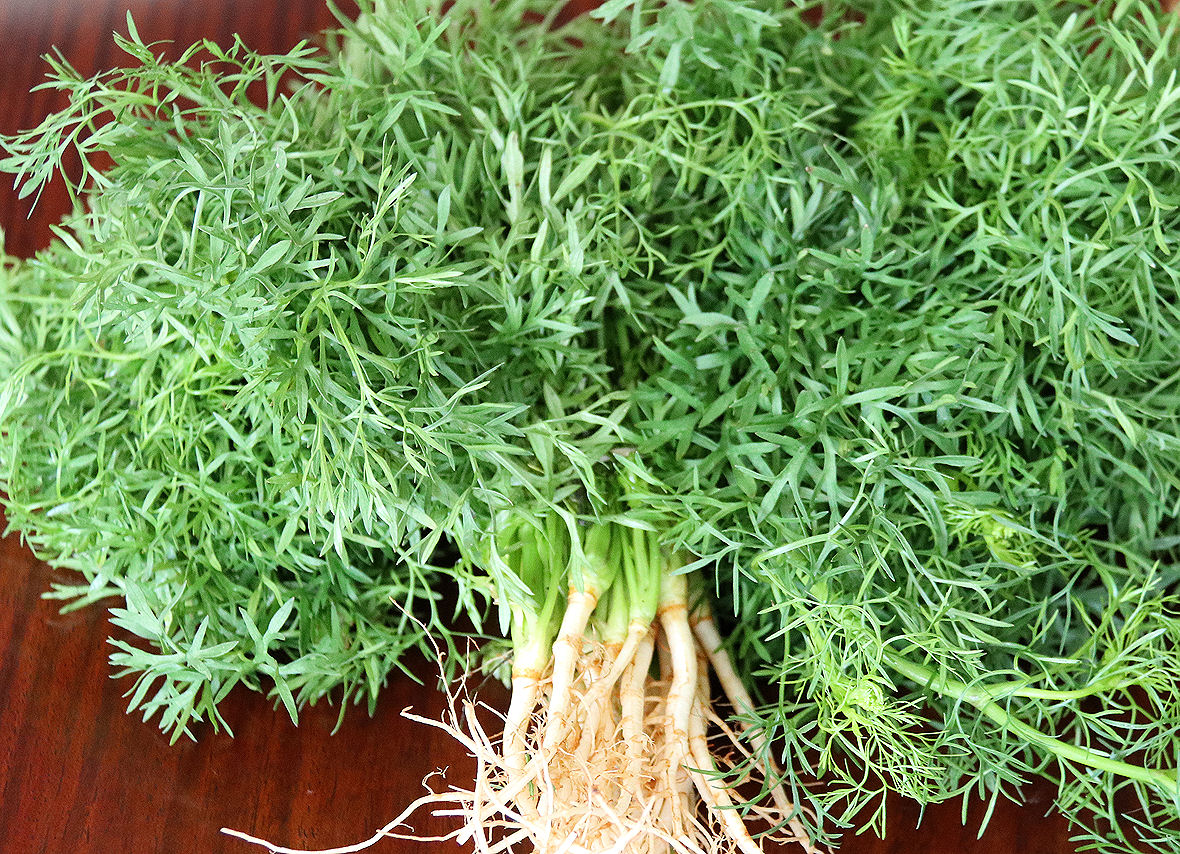 Culinary Uses: As a major herbal and spice component in Southeast Asian, Asian, Central Asian, East Indian, Mexican, Middle Eastern, and Southern Europe cuisines, fresh and dried coriander is complementary to any cuisine. There are multiple uses for fresh leaves and stems, from adding to sauces or cooking with other ingredients, to simply topping a finished dish, salad, or sandwich. It is exceptional with noodles and pasta, seafood dishes, pork, chicken, lamb, mushrooms, and tofu.

Dried coriander fruit is exceptional blended into curries and braised dishes, breads, pastries, and sauces. It is an integral component of many spice blends including Baharat, Kuwaiti, Tess Mauds, and Dukkah.

* This synopsis imparts valuable information that could be beneficial as part of a wellness program. Its purpose is to open the thought process to consider including herbs and spices as natural supplements in personal regimens. Briefly stating how the plant was valued and used historically in different ages and cultures, it lists some current uses. If interested in this particular plant, please extend your research via books and articles for more details and uses.

With increasing interest for including alternative therapies with standard drug therapy, research continues, so this topic evolves continuously. Please consult your wholistic and holistic practitioners, homeopaths, nutritionists, dentists, and physicians to keep yourself updated if you choose to incorporate or ingest the plant in any form for medical purposes. 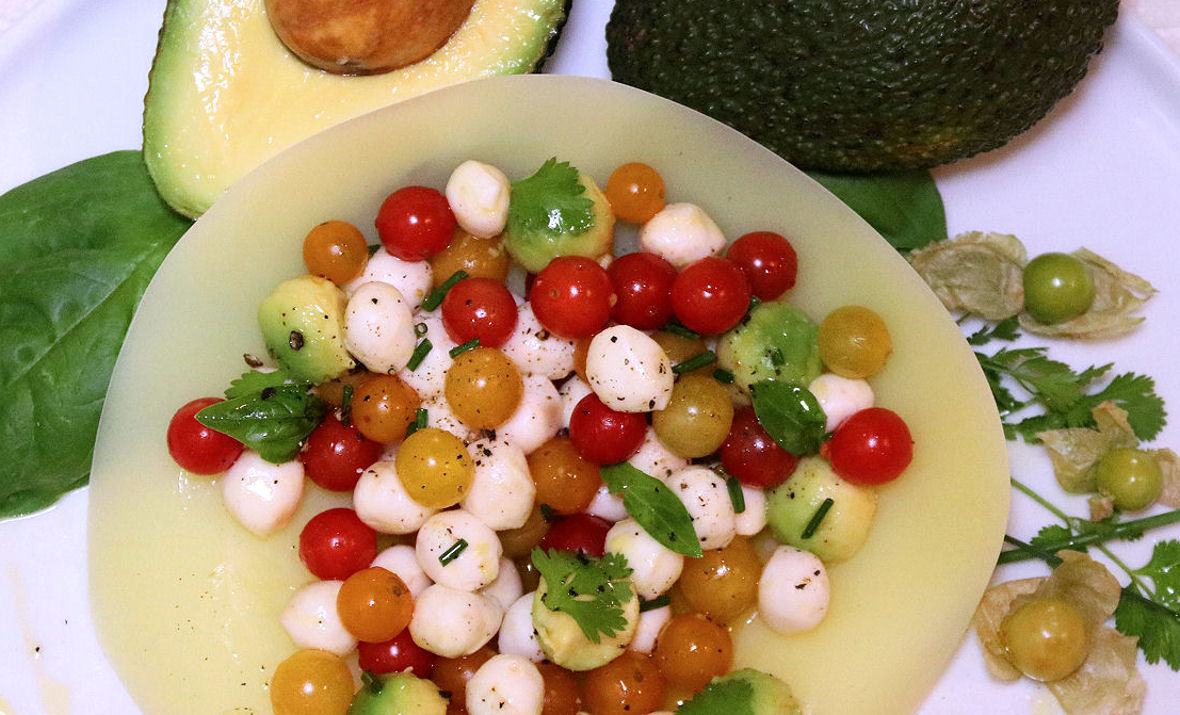 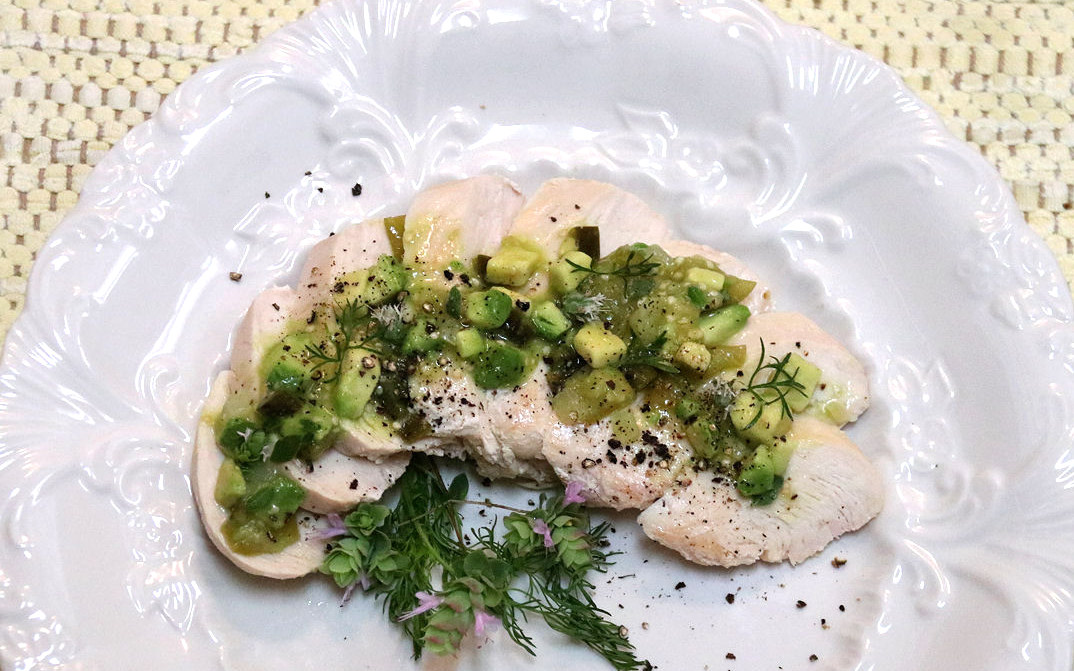 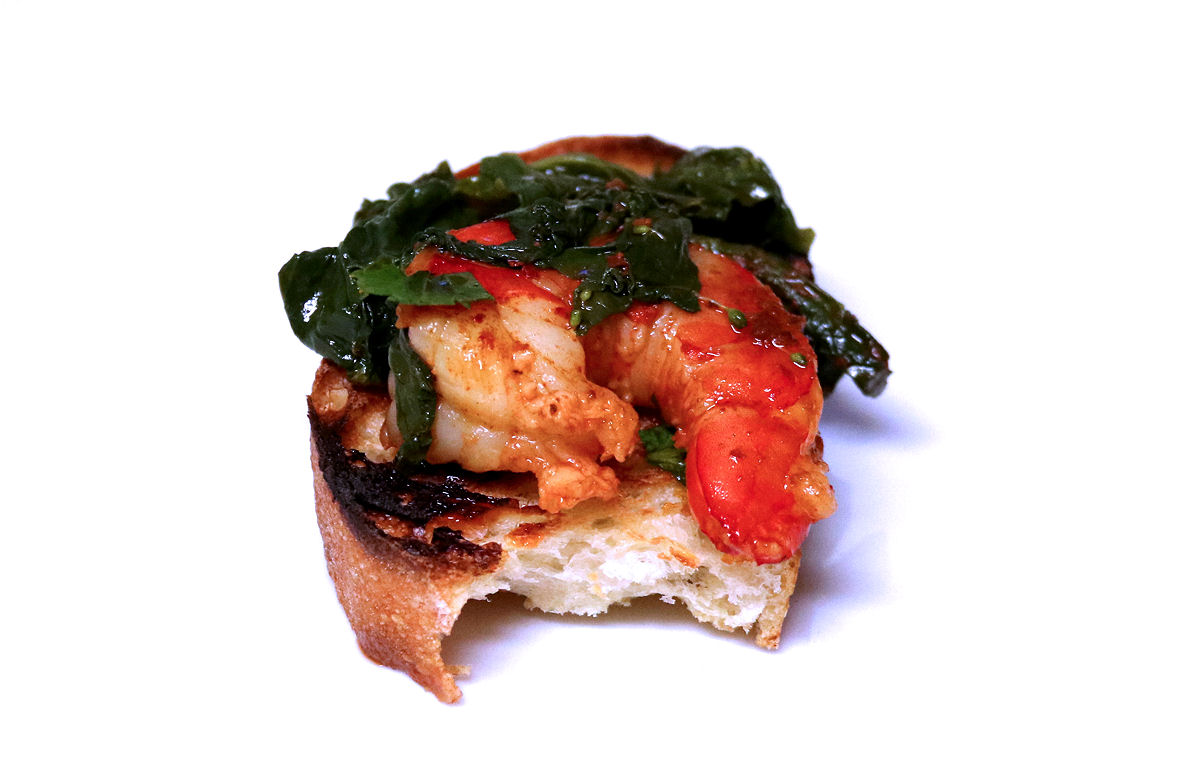 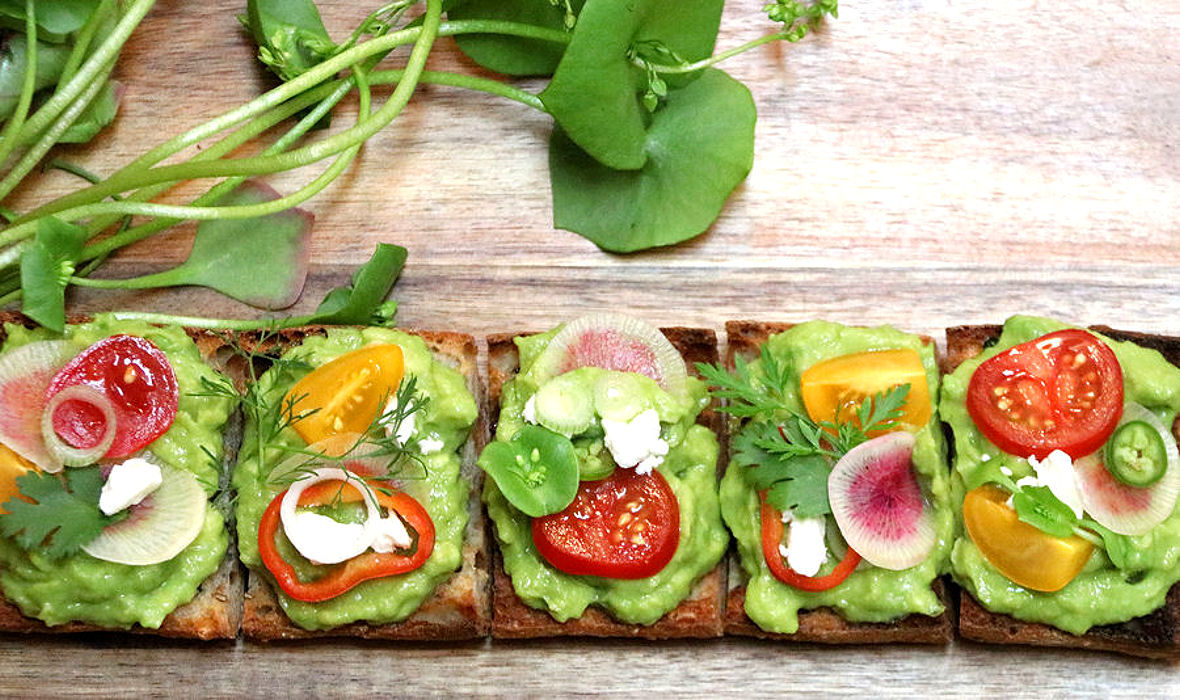