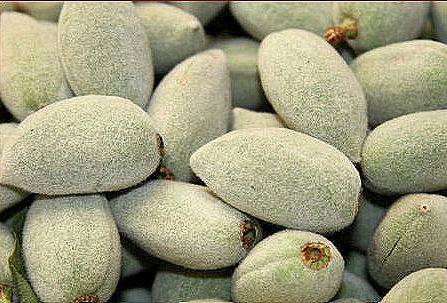 Green almonds and mature almonds are the edible seeds of a tree. Considered a fruit, not a true nut, almonds are drupes, fleshy fruit with a thin skin and a central stone. (Olives, plums and cherries are drupes.) Mature almonds are what we often think of as “almonds”. Sold in their hard brown shell or shelled, the brown seed coat covers each almond. After being treated with hot water, this seed coat is removed and the almond is called “blanched” revealing the ivory-colored embryo.

Immature almonds are called green almonds. When young, they are eaten whole and are enjoyed in Italy as a refreshing snack. In trying to describe the flavor of green almonds, it is nebulous. Think of common green table grapes only a bit tart, or raw green beans, or cucumber with its mild but refreshing tartness. Extremes of temperature, as in freezing, boiling or frying, intensify their flavor to sharp tartness.

Young with gelatin center: For 3 to 4 weeks every Spring, green almonds are at the “youthful” stage. They are developing the inner seed (also known as kernel or nut) and when doing so, initially that seed is a firm, clear gelatin surrounded by an entirely edible pod. Squeeze a young green almond and it gives into pressure. Thinly slice or eat whole.

Forming a firm kernel yet soft: Within 1 to 2 weeks from the gelatin stage, the gelatin firms up and the seed begins to form turning ivory-white in color. While still pliable, it can be thinly sliced. Squeeze at this point and the green almond remains firm. This is the final time the entire green almond can be thinly sliced or eaten whole. After this stage, the green almond matures with its fuzzy exterior growing and splitting, revealing its hard outer shell we are familiar with. Inside, the seed grows and hardens to what we think of as almonds.

Sweet almonds are a rich source of Vitamin E, Niacin or Vitamin B3, and mono-saturated fat, one of two good fats for lowering LDL cholesterol. They contain good levels of calcium, iron, magnesium, phosphorus, potassium, and zinc. They contain 22% protein, 12% dietary fiber, and are gluten-free.

Cooking and Pairing Ideas: To prepare green almonds, remove the stems from the almonds. Rinse under cool running water, drain and thoroughly pat dry. (Using the sharp edge of a knife, gently scrape off the fuzzy exterior if desired. Rubbing raw green almonds in a kitchen towel isn’t effective in removing the fuzz, but does provide an upper body workout. Blanche them for 2 minutes in boiling water then rub in the towel and the superficial layer of fuzz rubs off easily; however blanching them increases the tartness.)

In olive oil, cook until lightly crisp or fry until golden. Drain, sprinkle with sea salt, then top with drops of aged balsamic vinegar and serve as a snack.

Served raw, sliced, or chopped, in vegetable salads and potato salads. Garnish a chunky fruit or vegetable sauce so it highlights the delicate flavor of these immature almonds. Shave into thin slices, then top sauteéd flounder, sole or scallops.