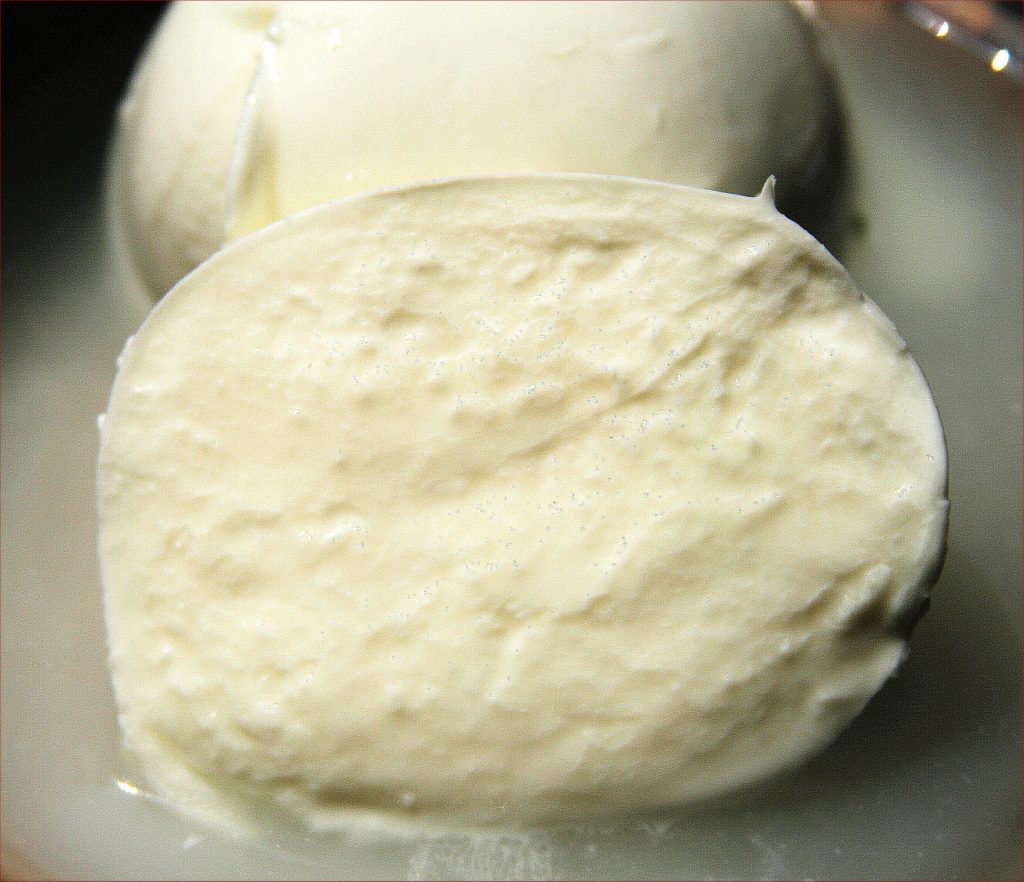 Mozzarella made with buffalo’s milk is the most highly prized mozzarella made in Italy. Given the D.O.P. certification, Denominazione d’ Origine Protetta or Protected Designation of Origin, Mozzarella di Bufala Campana is guaranteed to be made in protected zones designated by the Italian government and made according to strict procedures and standards from breeding to final production. Those zones are located in the regions of Campania (provinces of Caserta, Salerno and parts of Naples and Benevento); southern Lazio (provinces of Latina, Frosinone and parts of Rome); Apulia (province of Foggia). The Consortium, Il Consorzio di Tutela della Mozzarella di Bufala Campana protects production and sale, defends the trade name globally, promotes continuous qualitative improvements and provides technical assistance to producers and breeders.

Originally introduced into Italy a millennium ago, water buffalo thrive in climates difficult for dairy cows, especially in southern Italy where weather temperatures easily reach 90 to 100° F/32 to 38 °C during summer months.

With an average life span of 15 years, the female buffalo does not produce milk early and late in her life, during her first and last 2 to 2 1/2 years. Normally she is 30 months old when she begins giving milk, and continues to do so for approximately 200 days a year, then a break and rest. A buffalo produces daily up to 40 to 50% less milk than cows, resulting in increased demand and price for products of buffalo’s milk and providing an explanation of why some products are blended with cow’s milk.

Soft and fresh, mozzarella is called a pasta filata or spun paste dairy product because the curd is stretched or pulled then twisted and cut off. The verb mozzare means to cut off, exactly what is done to the curd; manually, the cheesemaster’s thumb and forefinger twist and hand-cut the spun paste then shape it into a ball.

All types of mozzarella are very popular served as a main ingredient and substitute for other proteins. It isn't just for topping pizza, chicken, and bread. In fact, using mozzarella as topping is less popular than serving it as the star of the dish. In most Italian regions, mozzarella is valued so much that is appears on the dining table from breakfast through dinner. If you are lucky enough to know a cheese-maker who just finished production, enjoy freshly-made mozzarella the way it was originally meant to be enjoyed – slightly warm. In southern Italian regions, a favorite breakfast offering is mozzarella served with ripe tomatoes and fresh basil, extra-virgin olive oil, and crisp bread.